You know the situation when you are with someone, and they are lost in thought, so deeply it is like you don’t even exist? Well that has been happening to us a bit this week. You see we are always with each other and so sometimes to find a little personal head space we have to zone out. Denis is much better at it than me. Just say my name and I snap back to being present, not Denis though, sometimes nothing short of a raised voice and rapid movement in front of his eyes will bring him back. This is not a common occurrence in our relationship, but like I said, this week it’s happened more than once.

Now to the point, today it happened at lunch, and I took exception to dining alone while sitting with the man I love. So, I made sure to be noticed and I wanted to be included in knowing his thoughts, so I asked about them, “what are you thinking about?” My question was met with low grade hostility, like I’d interrupted something important and personal. I was shocked, hurt and peeved all at the same time. We don’t have secrets, I just wanted to be included and his hostility was out of line no matter how minor his tone had been. It was this that we used to snark at each other for a very short time before we agreed to disagree.

So less then an hour later I am again asking him about is inner thoughts, he again shut me out. I can be a little thick sometimes. Why do any of us think we are entitled to another’s thoughts unless they willing want to share them with us. I know he always shares with me when it is the right time, or he has had time to figure out the bits and let it mature to something he can talk about, but today I pushed him. I was wrong. So I apologised and we moved on, respecting each others needs.

It is good we can do this, we can talk about anything (when the time is right) and it makes us better for each other and better parents, and tonight Lily needs us, I am not sure but I think she might be fighting a bit of a cold. She has not been herself today and she needs a little extra TLC this evening… so I am off to be one half of a great team and be there for our little girl in what ever way she needs us tonight. 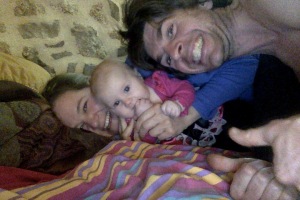