Denis woke Lily up with four little fledglings he found in the horse’s pasture. He wanted to know what to do with them to keep them safe from large horse hooves, hungry pigs and opportunistic cats.

Lily didn’t know what to do with them but the chirping, the fluttering and the short flights made her so curious and she wanted to touch them. I am sure would have even offered to stuff one in her mouth, as that is how she likes to explore most things at this point in her life. She caught one briefly by the tail but let go quickly as both her dad and I had minor panic in our movements and voices but thankfully she knows the word ‘gentle’ and so off flew the birdy just as fast as it was caught, unhurt.

Denis was the birdies guardian all day, especially after finding a fifth one and then being back to four when the parents (we assume) attacked the fifth one while he was not there. Back to four little babies, he was not about to let them die, so the weakest was brought into the house to warm up and get a bit of well wishes and prayers before, a bit of internet research said to send him back out. We did, and Denis sat on a basket next to them waiting to see if the parents would feed the weakling. No luck.

Determined not to let the little one parish he picked it up and was preparing to bring it in, with us fostering it for a few days until it could sort itself out. At this new higher vantage, our spunky little friend made the short flight into the trees in front of him. Wondering what would happen now we sat back down to wait and see what nature would teach us. Sure enough now that our refreshed little birdy was showing such zest for life his parents started to feed him. We waited to make sure it was not an accident and when we were satisfied he was no longer being treated as an outcast we picked up the little temporary nest so the others could see the trees too. One by one they flew into the branches, safer from the dangers Denis had protected them from all day.

He has checked on them a few times since but now they are on their own. The little one we lost makes us sad, of course had we known it would come to harm we would have done more to intervene and possibly save it. He giveth and He taketh away but always there is joy to be found if you know where to look. For us today it was in the branches of the trees at the end of the day, with little voices ringing out loud and clear for nourishment. They will in time go out and have their own adventures having found a safe first day out of the nest in a tall and unfamiliar fellow traveller. Who knows, maybe one day they will meet us in Africa if they pop down to avoid the winter. 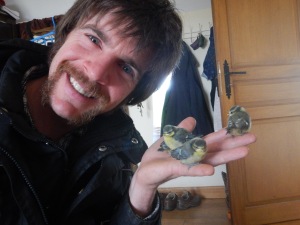